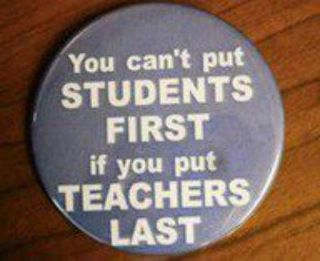 I saw this button on Facebook and it reminded me about what's going on in the central Shenandoah Valley with schools, teachers, budgets, parents, and students. Finger-pointing about money, cuts in programs, layoffs of teachers and aides, and closing of schools has left the community feeling vulnerable and uncertain about the future. Staunton City schools are facing layoffs ... Waynesboro's city council and school board talked about bringing in a mediator to work out budgeting issues.

It's left teachers feeling vulnerable and uncertain, too. Listening to one long-time teacher last week at the Augusta supervisors meeting talk about leaving Augusta County for a job with the Rockingham school system because she feared losing her job locally was sad to hear. It also showed the reality of the situation.

Augusta teachers are updating resumes as a certain fear sweeps through the ranks of those who teach the children. Augusta County's school board decided in December to close Ladd Elementary School, saddening a community of teachers and parents who had asked that it be kept open. Last week, the school board went a step further and put Craigsville Elementary on the table for possible closure, too.

But the shock wave that went through the community was the school board's suggestion that the Shenandoah Valley Governor's School could be closed due to budget cuts.  Located in the Fishersville area of Augusta County, its closing would affect students from seven high schools in Staunton, Waynesboro, and Augusta.

After cutting $15 million the past four years, Augusta schools are now looking at the need to cut an additional $3.4 million. Part of the deficit is due to Richmond passing along part of the financial burden from the Virginia Retirement System. Part is due to a poor reassessment done four years ago that cost $1.3 million in lost school funding due to the composite index, and some have even begun to ask whether it's time to raise Augusta's real estate property tax from one of the lowest in the Commonwealth. Fielding questions from the public, the county has posted a budget survey on their website requesting input about spending.

A woman with the Constitution Party stopped and talked with me before the supervisor meeting last week, basically questioning why our local Governor's School should be here. I was surprised at her seeming anger, the attitude of "how dare we use taxpayer money" for such a gem in our education crown, and later heard similar thoughts from at least one supervisor.

As one of only eighteen Governor's Schools in the Commonwealth, and knowing that other communities are looking to have their own Governor's Schools, that kind of attitude is stunning. We are a rural area, small fish in the large pond that is Virginia, and most feel very fortunate to have such quality education available to students in the central Shenandoah Valley.

Teachers who could have taken their expansive knowledge and PhDs to universities and private industry -- and made much more money than the bottom-of-the-pile salaries of Augusta County with no pay raises for four years -- instead invested their love of teaching at Shenandoah Valley Governor's School (SVGS), working with gifted and talented students who will go on to be among the leaders of the future. Teachers with a vision of that future offer their time, talent, and advice -- and sacrifice -- to teach.

Teachers use their own time and resources to travel with students for statewide competitions as they compete in research, as members of teams that include Electric Vehicle, Robotics, Network, and Envirothon, and participate in outreach with elementary and middle school students.

SVGS's Math Science and Technology program as well as the Arts and Humanities program offer college prep and dual enrollment classes from James Madison University, the University of Virginia, and Blue Ridge Community College in everything from research and engineering, molecular biology, and AP computer science to acting, theater, and advanced art classes.

Yet it's not good enough for some. Why would they be willing to give up their Governor's School when so many others long to have one?

SVGS Director Lee Ann Whitesell said it well when she addressed the Augusta County Board of Supervisors last week. Dozens of students, parents, and teachers packed the room to protest the news of its possible closing, and Director Whitesell, standing before the board, looked around at those students, then noted, "From the ranks of our students may be that one who brings business to this area."

Indeed, this area needs business. Toyota, who expressed interest in locating to Augusta County in 2006, bringing with it 2,000 jobs, was run off by short-sightedness from those who did not see the looming recession right around the corner nor the need for jobs for local students wanting to stay or return to the area after college. Toyota, with its history of helping the communities where it locates, could possibly have helped with the local community school deficits and most certainly would have helped employ those who currently travel great distances to find work.

Now that same lack of vision for the future of the county and, indeed, the entire area seems to continue. I listened to SVGS students address the board and speak of their admiration for their teachers and appreciation of the challenges that are offered, the doors that are opened, and the guidance provided that helps with admission to universities and overseas learning.

How can such a gem be taken for granted? What is it about this area that makes government leaders not see the bigger picture and look to the future? Children especially seem to be overlooked ... take for example the Rocket Boys who were shut down by Augusta County government bureaucracy.

An energetic group of teachers and parents, frustrated at the stalemate between supervisors and the school board, have formed Support Our Schools (SOS). Currently they are circulating an online petition that has already collected almost 1,000 names of those asking to increase support and revenues for public education. SOS has also encouraged residents to attend the February 22 Augusta Board of Supervisors meeting to show support and speak to the issue. More details are at their website.