Snow and high winds in Valley 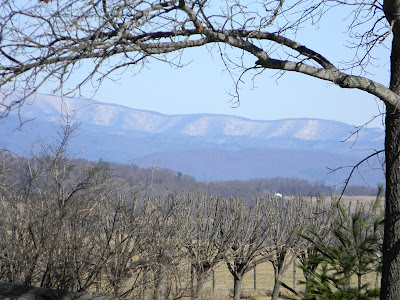 Snow-covered Appalachian Mountains as seen from my front porch.
It's going to be a mixed bag of winter weather today in the Shenandoah Valley as high winds swoop in along with sometimes-heavy snow squalls with high temperatures in the 30s and overnight lows expected to be in the teens. Indeed, we are experiencing horizontal snow on and off here in western Augusta County.

NBC-29 is reporting, "A Wind Advisory, perhaps High Wind Warning, will likely be issued by the National Weather Service for later this afternoon and tonight."


"A Winter Storm Warning is in effect for Western Grant, Westerm highland, and Western Pendleton counties until 7pm Sunday. Up to 8" of snow accumulations are possible, with blowing snow likely over the weekend.

"A Winter Weather Advisory is in effect through 7pm Saturday for Hardy, Eastern Pendleton, Eastern Highland, and Eastern Grant counties. Accumulating snow of 1" to 3" is possible with possible blowing snow through Saturday."

Up to a foot of snow is expected at Showshoe Ski Resort in West Virginia. WxRISK.com posted on Facebook:

For those in the central Shenandoah Valley waiting for that really big snowstorm, this probably won't be it but it's very pretty as I gaze out the window and look at the bursts of heavy snow coming down. The wind chill is going to be bone-chilling and nasty especially for those on the ski slopes this evening.

It's winter in the Shenandoah Valley....