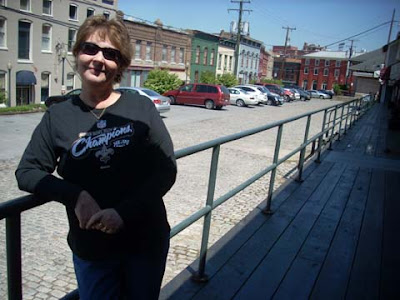 Trixie Averill outside The Depot Grille in downtown Staunton's historic wharf area.
The 2012-13 election cycle in Virginia won't be missing Trixie Averill anymore. Longtime volunteer, organizer, and staff member for many Republican candidates over the years, Trixie will be back to work for Lt. Governor Bill Bolling's campaign for Governor during the crucial months ahead.

Named one of the most influential people in Virginia on the Republican side of the aisle in June 2011, the proud military mom became Sixth District Congressional Chairman in 2010. However, she gave up that position in 2011 and left the Republican Party to become Virginia Director of Americans for Prosperity when Ben Marchi left to go into private business. Her absence from the GOP was felt by western Virginia Republicans who, for the first time in years, found themselves working campaigns without Trixie.

Trixie felt it, too. More comfortable working with grassroots volunteers, she left the AFP State Director position after six months and became the AFP director of statewide grassroots. Something, however, was still missing.

She missed the excitement of the campaigns, the smell of a bumper sticker that could not touch her car or the sight of a political sign that could not be displayed in her yard without losing credibility and compromising AFP-VA. Gone was the frenzied momentum leading up to the last days of an election and the exhilaration of winning or the agony of defeat that goes through anyone who has put blood, sweat, and tears into campaigns.

So now she's baaaaack! Hitting the ground running, look for her at your local Republican meetings sometime soon.

Trixie. I knew she couldn't stay away. Welcome back!