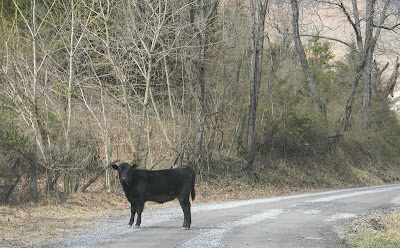 When driving the back roads in any rural area, it's not unusual to see cows that escaped through a fence. This heifer was standing in the middle of the road ... the barn was to the right of the photo out of frame. 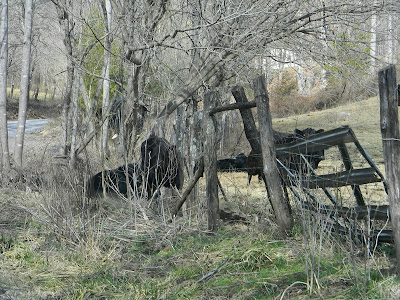 Two other heifers were on the road side of the fence but, as is common, they were hanging around because the mama cow was on the other side. It reminded me of the days when we lived on Corey-Dan Farm in North Carolina, and the knocks on the door in the middle of the night when a passerby found Simmental cows on the hard surface road. We would throw on clothes and head out to get them back through the hole in the fence or drive them up the driveway and in through the gate, then repair the weak spot in the fence. It was irritating at the time but, looking back, those were fun days.
Photos by Lynn R. Mitchell
23 February 2012
Posted by Lynn R. Mitchell at 2/25/2012 06:09:00 PM