Augusta County tonight: Save Our Schools (SOS) supporters at Board of Supervisors meeting 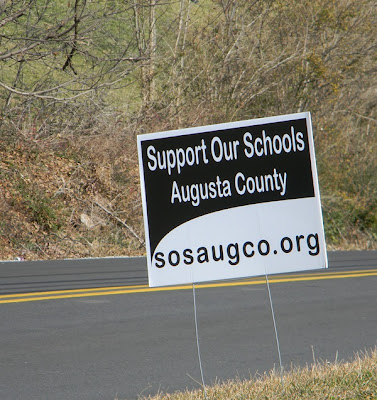 In a widely-publicized plea, the parents, teachers, and students who make up SOS have asked those who agree that education must be preserved to show up at tonight's supervisor meeting and to wear red to show solidarity and support for schools.

Falling several million dollars short, the school budget is stuck between supervisors and school board members and state mandates.

SOS is a grassroots group that spontaneously grew out of news that Craigsville Elementary and Shenandoah Valley Governor's School could both be on the chopping block if funds were not found. In December 2011, the Augusta County School Board voted to close Ladd Elementary School. It has only been in existence for about three weeks but has already gathered more than 1,000 signatures with an online petition asking for funding to support the schools.

Last week, SOS yard signs began showing up at homes and businesses along popular routes in the county. Tonight, it's anyone's guess as to how many county residents will show up and stand up for what has become a volatile subject in not only Augusta County but also the adjoining cities of Staunton and Waynesboro.