Do you remember Muggsy Bogues? 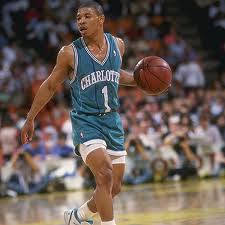 I like watching "The Five" on Fox News Channel. This group of five commentators that comes on in the 5:00 pm time slot, added when Glenn Beck was dropped eight months ago, discusses topical issues on a daily basis. Today while watching the Friday "Five," they were discussing the NBA and the name Muggsy Bogues came up.

Muggsy. He is well known to my family ... we loved Muggsy in the 1980s and '90s. He was an original member of the Charlotte Hornets when they were in Charlotte, NC, a "small" city in NBA terms, that won a coveted NBA franchise, much to the delight of Carolinians for miles around who were grateful to owner George Shinn. He never gave up the dream that if he brought it, the fans would come. And come, they did, young and old alike, even having a hand in naming the team.

We lived an hour north of Charlotte and the Hornets, who played at the Charlotte Coliseum built just for them, were our team. North Carolina native Alexander Julian designed the uniforms, a purple and teal design that was immediately recognizable by everyone and made the Hornets apparel some of the hottest and most sought-after in the NBA.

In a world where 6 feet 7 inches is considered average, Muggsy, at 5 feet 3 inches, was the shortest NBA player ever. A native of Baltimore, he attended college at Wake Forest University and set a record for assists, making a name as a speedy, accurate point guard who could dribble circles around his much-taller opponents.

Drafted out of Wake Forest by the Washington Bullets, Muggsy got snatched up by the Hornets when they were formed in 1988. From Wikipedia:


The Miami Heat and Charlotte Hornets were set to enter the NBA for the 1988–89 NBA season. Despite their weakness at the point guard, Bogues was left unprotected by the Bullets. On June 22, 1988 the Hornets selected him in the expansion draft. As Bogues settled in Charlotte, he established himself as an exceptional passer, a great ball-stealer, and one of the fastest on court.

We had the pleasure of attending some Hornets games during the years we lived in Carolina, and I can still remember our young son standing and enthusiastically cheering on his beloved Hornets from about the age of five through age 12 when we moved back to Virginia.

In 1996 when Whoopie Goldberg was in Charlotte to film the hilarious and heart-warming basketball movie Eddie, Muggsy had a cameo part. The public was invited to participate as extras in the movie and they packed the coliseum to be part of the scenes.

One thing's for sure: anyone who lived through those early years of the Hornets basketball franchise never forgot the original players:

Unlike many expansion franchises that invest in the future with a team composed entirely of young players, Charlotte stocked its inaugural roster with several veterans in hopes of putting a competitive lineup on the court right away. The team's expansion draft picks included 6-5 Dell Curry of the Cleveland Cavaliers, who developed into one of the NBA's best sixth men.

Picking eighth in the 1988 NBA Draft, Charlotte selected 6-4 Rex Chapman, an outstanding long-distance shooter who was leaving the University of Kentucky after his sophomore year.

The Hornets began play in the 1988-89 season at the 23,698-seat, $52-million Charlotte Coliseum. The opening-night lineup included Tripucka, Rambis, Hoppen, Reid, and Green. The Hornets' first opponent was Cleveland, and the Cavaliers gave the Hornets a rude welcome to the NBA with a 133-93 drubbing. After a road loss, Charlotte picked up its first victory with a 117-105 triumph over the Los Angeles Clippers.

Muggsy was proof that dreams do come true. Who would ever have thought a 5 foot 3 inch basketball player would make it to the NBA? Muggsy did along with his winning smile and personality that won the hearts of fans on and off the court.

Retired from the NBA, today Muggsy still lives in Charlotte and is boys coach at United Faith Christian Academy as well as coaching basketball camps and working with children. Muggsy ...  thanks for the great memories.
Posted by Lynn R. Mitchell at 2/24/2012 09:00:00 PM