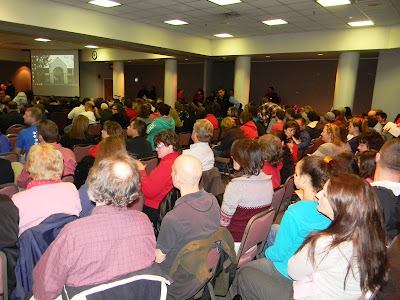 Crowd of 350 plus packed the room. Many are waiting in the hallway (see photos below). 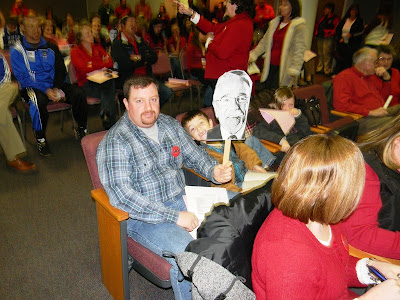 Signs were throughout the crowd.... 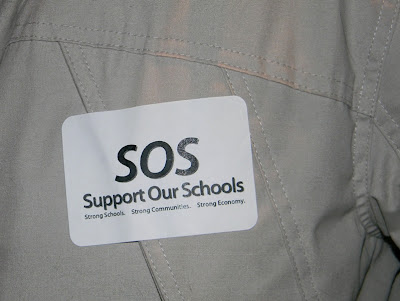 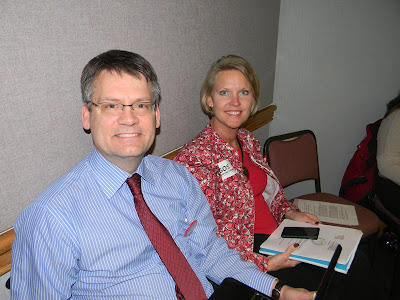 A teacher and a realtor, Kurt Michael and Vonda Lacey. 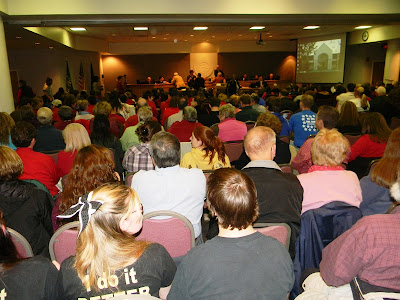 It's now 6:45 pm, 15 minutes before the Augusta County Board of Supervisors meeting is to begin, and it's full....

7:00 pm: Meeting began with Pledge of Allegiance and prayer.

7:04: Chairman Tracy Pyles is introducing the supervisors to the overflow crowd. Organizers of this grassroots group has "Support Our Schools" signs and "SOS" buttons and stickers.

7:08:  Zoning  issues being addressed first as more students file in the door.... 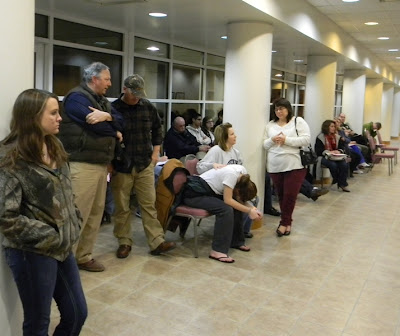 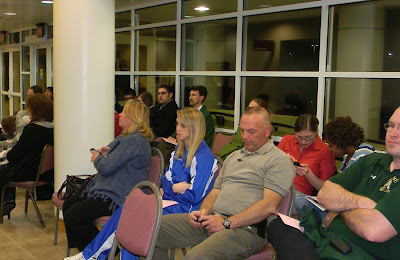 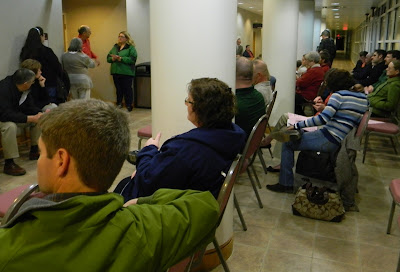 (Laptop battery went out during meeting ... the following from my written notes.)

9:00: Cheerleaders from various schools stood while one addressed the board, then each other others followed.

9:04: A grandfather with four grandkids in Augusta County schools spoke....

Speakers continued. One expressed offense at being called "childish" and other names, to much applause in the room. The theme of the evening: Raise taxes if that's what it takes to keep the schools operating.

Lots of comments about all the schools, Shenandoah Valley Governor's School, sports programs. A variety of people from the community spoke including the organizers of SOS who had a PowerPoint presentation ready to educate the public and the board. They were all dressed in red shirts.

9:40: Speakers finished and the supervisors responded.

Supervisor Marshall Pattie (North River) had a PowerPoint presentation explaining how the money has been diverted by the state and the Virginia Retirement System (VRS). I'll try to get the photos of those slides up tomorrow. He suggested folks may want to contact their legislators because the budget process has not been completed.

Supervisor David Beyeler said he would support raising taxes, to applause from the room.

Supervisor David Karaffa said he had a daughter in the school system and wants to see funding for the schools.

Chairman Tracy Pyles said the lack of funding is a direct attack on education and criticized tax cuts for private schools. There was applause and laughter when he referred to the state delegates as "BELCH" ... "Bell," "Landes," "Cline," "Hanger" and expressed disappointment that there was a lack of funding for education.

Pink slips have already gone out in Augusta County. Teachers are saying morale is low. Some express a lack of confidence in staying in the Augusta County school system and are considering looking elsewhere although they don't want to do it.

It was a group of passionate teachers, parents, and students who made their thoughts known. Support Our Schools has yard signs, buttons, stickers, and an organization .

The public hearing for SOS finally ended at 10:00. There was more on the agenda after that and then a closed meeting for the supervisors so they may not get out of there until midnight. Meanwhile, I left after the school heading to come home and get this updated and catch the news about the presidential debate from Arizona.

All the local media were there so it will be on TV and in print.