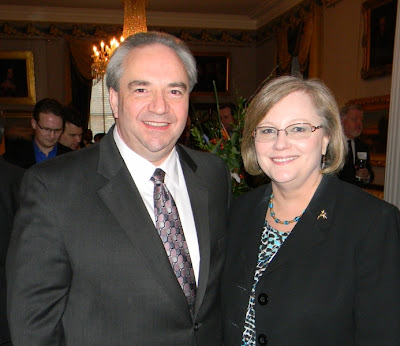 
While some politicians cast a wary eye toward bloggers, Virginia's top Republican office holders have spent the past five years recognizing these writers who report on government and often talk one-on-one with elected officials.

It's a great idea. The first impromptu meeting five years ago at the Republican Advance with then-Attorney General Bob McDonnell brought together a dozen conservative bloggers to talk about this rising form of communication. That continued with the annual gatherings hosted by Republican Lt. Governor Bill Bolling at the Capitol for the past four years which has provided a means of fostering the lines of communication with the eclectic group of writers.

Wednesday's program offered bloggers the chance to talk with lawmakers and sit in on House and Senate sessions, photo ops, an update from political analyst Dr. Bob Holsworth who authors the Virginia Tomorrow blog, and a look into political consultant Boyd Marcus' crystal ball (he has consulted on some of Virginia's highest profile Republicans including U.S. House Majority Leader Eric Cantor, Congressman Tom Bliley, Governor Jim Gilmore, and Governor George Allen). That was followed with up-to-the-minute briefings and commentary from House Republican Whip Bill Janis and the Senate Republican Caucus Leader Pro Tempore Ryan McDougle who had just finished sessions in the House and Senate.

The event kicked off in the morning as thirty-five bloggers, representing some of the best that Virginia has to offer, gathered in Gov. McDonnell's conference room as Bolling provided an informative briefing and presided over a round table discussion of topics on everyone's minds: jobs, the budget, transportation, and ABC privatization. He was flanked by his Chief of Staff Randy Marcus and McDonnell Communications Director Tucker Martin who joined in the conversation.  Included in the group was fellow Washington Examiner LOZ and EOZ blogger Norm Leahy.

There is much to write about with a Republican administration that has brought fiscal restraint back to Virginia and put an emphasis on jobs at a time when many had been lost ... and, boy, can Bill Bolling talk jobs! As the Commonwealth's chief jobs officer, he enjoys what he does and likes to share what has been accomplished in the first year of the McDonnell administration. His outgoing personality and work ethic make the pairing of McDonnell-Bolling perfect for putting Virginia on a positive employment track, now ranking fourth in the nation for number of new jobs after languishing in 35th place during the four years of Democratic Gov. Tim Kaine's administration.

That's important because the buzz on everyone's lips throughout the day was speculation over the possibility that Kaine may jump into the U.S. Senate race after Democrat Jim Webb announced he was retiring after only one term. With George Allen already running, an Allen-Kaine race would pit two former governors against one another, spotlighting Virginia at the national level. The opinion of Holsworth as well as Boyd Marcus seemed to be that Kaine would become a candidate because "they will twist his arm until he says yes," adding that he has the highest name recognition of any Virginia Democrat.

For the inner political geek that resides in every political blogger, observing the Virginia General Assembly at work is both an exercise in politics and patience. The senate chamber is more staid as 40 representatives carry out the business of the day presided by Bolling, sometimes dragging but other times moving at breakneck speed to accomplish everything in the 45 days of this year's short session.

The House of Delegates offers more excitement with its 100 members sometimes engaging in spirited exchanges, providing entertainment for visitors. Elected every two years to assure they remain in close touch with their constituents, they represent the citizens in the manner prescribed by Virginia's founders who walked the halls of the Capitol before them ... Patrick Henry, Jefferson, Madison, and Monroe ... who chose to have citizen legislators govern the Commonwealth by spending most of their time at home and not in Richmond.

The wonder of cell phones has made it possible to communicate with representatives during session, something those of us visiting in the gallery took advantage of in the past and did so again this time.  After sending a message to Del. Ben Cline (R-Lexington) that said, "Look up," he joined us, greeted and thanked everyone for being there, and explained the bill on the floor at that moment.

A text message sent to former blogger and new Del. Greg Habeeb (R-Salem), who won his seat in a special election held in January to replace Morgan Griffith who won the 9th Congressional seat in November, resulted in this young representative smiling and tweeting that there were bloggers in the House.

On the Senate side of the state house, Sen. Mark Obenshain (R-Harrisonburg) saw us from his desk on the floor and joined us in the gallery to talk about how conservative senators have taken a stand in the Democratically-controlled Senate even though they are constantly outvoted. With redistricting on everyone's minds, many wonder if the Senate will switch to a GOP majority in the future.

At the end of the day, all gathered for a reception at the Executive Mansion that was co-hosted by McDonnell and Bolling, and offered a unique opportunity to admire Virginia's historic governor's house from the inside. Jean Ann Bolling was also there, joining her husband and the Governor to mingle with those at the reception. Many bloggers, carrying plates with roast beef, shrimp, and other goodies that were provided, talked with the Governor, Lt. Governor, fellow bloggers, and executive staffers as they swapped stories and exchanged business cards.

The reception highlighted the comfortable working relationship between McDonnell and Bolling as the two bantered back and forth in a good-natured and easy manner. These two political allies avoided becoming political enemies two years ago when Bolling put his gubernatorial aspirations on hold, clearing the way for McDonnell to run unopposed, and providing a much-needed respite instead of a bloody primary that could have damaged the Party.

In November 2009, McDonnell won by historic proportions with Bolling easily winning reelection. Together, they have made a good team for Virginia with both recognizing the importance of cultivating a relationship not just with Virginia's citizens but also with Virginia's citizen journalists.
Posted by Lynn R. Mitchell at 2/07/2012 12:20:00 PM