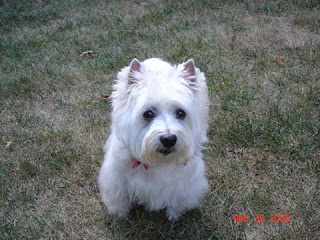 This week Wal-Mart announced they were pulling Chinese-made doggie treats off the shelves after receiving complaints from customers that the products had sickened their pets. This followed the ban of other dog food products over the past several months due to poisonous additives from China that caused the deaths of an estimated 2,000 dogs nationwide. Other products have been pulled including toothpaste and mouthwash because of unsafe and potentially hazardous additives from China, and now the government is looking at unsafe imported Chinese seafood.

Everyone knew Olivia because she campaigned with her owner -- stumping for George W. Bush, Jim Gilmore, Mark Earley, George Allen, and lots of local candidates throughout the state.

Sometime in March 2007 Olivia became lethargic, stopped eating, and began drinking lots of water. It was the first sign something was not right ... and she was taken to the vet's office where two blood panels showed kidney problems.

It's one thing to hear about the recall of dog food ... it's quite another to put a face to the tragedy when it happens to a friend.

Olivia's owner was notified by PetSmart, the store where she bought the dog food, that Nutro Ultra canned food -- Senior and Weight Management 3 -- had been recalled due to the deaths of animals nationwide. Because she had a PetPerks card they were able to trace owners to directly notify them that they had purchased the tainted food.

However, the warning was several weeks too late for Olivia who was already showing signs of kidney failure and had been placed on a special diet.

Faced with kidney disease but still not aware of the recall, Olivia's owner was informed that many people and pets can live a long time with it and this was, they thought, in the beginning stages.

This was one dog who didn't know she was a "d-o-g" ... she truly was part of the family and a constant companion throughout the years as she traveled up and down the Shenandoah Valley going about her Republican activist work.

However, she got progressively worse day by day so that, by the time the recall came out, she could barely move and her blood count was off the chart. The vet said she had progressed rapidly and was now in kidney failure ... and there was nothing else to do but take her home and wait for her to die.

This little munchkin ruled the roost at her Roanoke home, feeling it was her job to chase and tree as many squirrels as possible in the yard. She policed the cats, always getting in the middle of any fracas between them and making them behave. She knew each by name ... she gave her favorite cat friend, Gilmore, a "cat bath" every day, licking him from head to paw.

Not willing to give up, Olivia's owner drove to her brother-in-law's veterinarian clinic in Marietta, Georgia, for a second opinion. He did an ultrasound and sent it off to a lab in California. They called back immediately. Had this dog, they asked, eaten the contaminated food? Her kidneys were poisoned and consistent with all the other recall dogs they had seen. Even with last-minute IVs and trying everything possible, Olivia could not be saved. 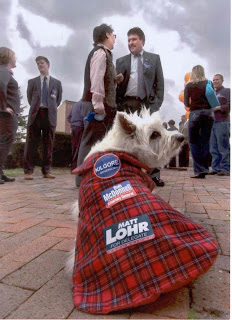 Olivia never said a cross word to anyone and was happiest on her owner's lap. She only tolerated riding in the car but would rather go than stay at home ... and go they did! It was nothing to see them pull up for a candidate's appearance, have Olivia jump out, and off they would go ... usually with Olivia sporting the candidate's lapel sticker on her doggie coat.

"We wanted to wait to 'cross the bridge' until Monday morning when we could go to our regular vet, but Sunday morning at 1:00 a.m. she was so bad, with violent vomiting and diarrhea and obvious pain (she hadn't been in pain before) and just looking at us begging for help, and we knew we couldn't wait so we went back to the ER and by 2 a.m. on May 20, 2007, she had crossed the Rainbow Bridge. It was the hardest thing I've ever done in my whole life, but she definitely let us know that she was ready."

She was truly loved ... and she is just one face of the thousands of dogs that died after eating dog food poisoned with additives from China.
Posted by Lynn R. Mitchell at 8/24/2007 06:14:00 AM

I knew Olivia for many years; she was both a darling child and an old friend. The best way to honor her memory is for all of us to work hard to put an end to this domestic terrorism perpetrated by a foreign power on those who are dependent on us for their very lives.

I loved Olivia from the moment I met her as a wee pup. She was always welcome at our home, especially our Christmas parties, as well as our children's weddings,and drop by dinners. Olivia's name appeared on all invitations! She always knew what to wear! She loved summers at Camp Fox Folly along with Katie Rose. Soon a new generation will visit camp with Colin Darcy being introduced to the cats, squirrls, rabbits, birds, and butterflies...

Olivia was a great friend and I miss her.