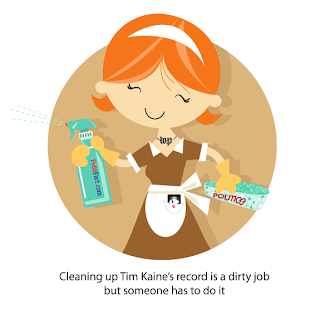 Illustration by Thad Hunter who noted,
"It's time to acknowledge the Washington Post, Politico, and Politifact assistance to the Tim Kaine Senate campaign by continuing to hide his true record and being willing to run interference as needed."

That's how many articles the Washington Post ran against Senator George Allen during the 2006 campaign.

Six years later, they are on the band wagon again. Not only did they endorse Allen's opponent, Tim Kaine, but they also showed their bias once more by writing two polar opposite profiles of the two candidates for front page stories. The profiles were published after their endorsement of Kaine.

NewsBusters took the WaPo to task Friday for being so blatantly anti-Allen. At a time when dailies are going belly-up perhaps, as has been suggested, because of their liberal one-sided leanings, and considering the WaPo has had their fair share of financial difficulties the past few years, it is surprising they did not learn something about being fair and balanced in the news media.


Commenters on the NewsBusters post have left a variety of thoughts. In response to the WaPost's ad nauseum mention of macaca, one commenter wrote, "I can think of three things off the top of my head that Biden has said that are more racially offensive than macaca."

In response to the WaPost's reference to Kaine attending a black church, another commenter wrote, "So he attends a black church but supports policies that destroy the black community -- sounds like Barack Obama."

And then there was the commenter who laid it all on the line. "Would you like to write an obituary for Newsweek? Please write one for Washington Post too."

This comment spoke volumes: "It's always a good policy to find out who the WAPO endorses and then vote for the other candidate." Ouch ... but an assessment many feel toward this left-leaning proud-to-show-it news outfit in D.C.

Meanwhile, the conservative Washington Examiner endorsed George Allen Thursday night in a thoughtful editorial that showed why his common sense, conservative values are needed in Virginia. Their compare-and-contrast of Virginia with neighboring Maryland sets the backdrop for endorsing the former Virginia Governor and Senator over the tax-and-spend Tim Kaine, and points out Kaine's rubber-stamping of Obama's over-reaching government programs:


Take Obama's signature domestic initiative, which Kaine supported wholeheartedly: Obamacare. […] With Obamacare's Medicaid expansion, that $1,200 per person spending gap will have to be made up somewhere. Where? Through higher taxes, and perhaps also through higher costs to the state's private employers.


Kaine has a long history of favoring the Democratic Party's best interests over those of Virginia. His decision as governor to hand over the Virginia-owned Dulles Toll Road to the Democrat-controlled Metropolitan Washington Airports Authority, or MWAA, was supposed to ensure a better-managed, more cost-effective Dulles Rail project. The MWAA rewarded the state by adopting a pro-union project labor agreement that discriminated against all Virginia contractors.

There's more facts and figures in the Washington Examiner's in-depth endorsement that relies, not on personalities and gossip, but rather on proven leadership that resulted in bettering the lives of Virginians. Too bad the Washington Post doesn't take a cue from that professional approach to journalism.