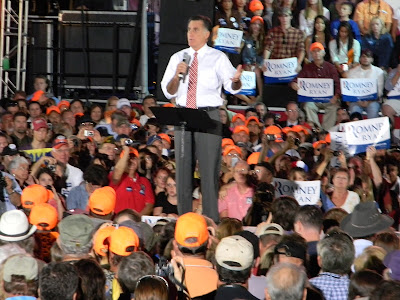 The Richmond Times-Dispatch wastes no time getting to the point in their enthusiastic endorsement of Republican Mitt Romney for President. Taking up a full page in the Commentary hard copy section of the Sunday, October 28, 2012, newspaper (p. E2), the opening paragraph lays it on the line:


The tone of the 2012 campaign might best be captured by the need to begin with an emphasis on what the Republican candidate will not do. Mitt Romney will not raise taxes on the middle class. He will not destroy Medicare. And he will not lie to the American people every time he opens his mouth.

The Times-Dispatch goes on to say that Romney strikes them as "more earnest and more accomplished than your average presidential candidate," someone who "understands the value of free enterprise, appreciates its utterly unique ability to alleviate poverty, unleash creative endeavor, spread wealth and lift the burden of ceaseless backbreaking labor." Those are attributes they do not see in the current president.

Noting that Romney understands the need to build the private sector, here are some points made in the endorsement:


He promises to:
These statements of principle are sound and strike an important contrast with Obama.

Like George Allen whom the Times-Dispatch endorsed last week, Romney wants to repeal Obamacare and replace it with common sense reforms that will not bankrupt the nation.

They end by saying, "He has earned our enthusiastic endorsement. America needs President Romney." It is a strong, dignified endorsement that should be read by Republicans and Democrats alike.