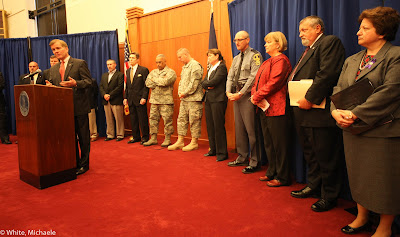 Ahead of the approaching storm, Governor Bob McDonnell has declared a State of Emergency in preparation for Hurricane Sandy. The storm is expected to have the potential to produce extensive power outages and significant flooding. Impact in the Commonwealth will begin Saturday night and possibly continue through Wednesday. The storm will be followed with colder temperatures including snow in the western mountains.

Here is the State of Emergency press release from the Governor's office (audio):


RICHMOND - Governor Bob McDonnell has declared a state of emergency in Virginia in preparation for Hurricane Sandy, which is anticipated to affect the Commonwealth over the weekend and early next week.

There is some uncertainty with the storm's final track, but all forecasts call for significant impacts to Virginia. Sandy will be transitioning to an extratropical storm as it reaches Virginia, leading to a broader wind field with a wider reach across the Commonwealth. In addition, current models predict a slower storm and therefore a longer duration event than usual.

Based on current forecasts, the eastern third of Virginia could experience tropical storm force winds for more than 48 hours, several inches of rain and coastal flooding. Even inland areas of Virginia could see strong winds and significant rainfall. There is a strong possibility of extensive power outages.

Residents in the western and southwestern parts of the state could see some snowfall, and all areas of the Commonwealth will experience colder temperatures in the wake of Sandy, which, when coupled with anticipated power outages, could produce additional challenges for Virginians.

Speaking about the State of Emergency, Governor McDonnell noted, "We are issuing this state of emergency today as a precautionary measure in order to ensure that we are ready for any potential effects of Hurricane Sandy in the Commonwealth. Weather forecasters are predicting significant weather impacts across much of Virginia, and a long duration event.

"Due to the track of this storm, and the fact that it will be a hurricane transitioning into a more nor'easter like system, we could see severe weather lasting for 48 hours or more in the state. In that scenario, saturated soil coupled with high winds could lead to major tree damage and extensive power outages. Now is the time for all Virginians to prepare for those possible power outages and disruptions to public services.

"In addition, forecasters predict falling temperatures during and behind this system, and in areas that suffer power outages this will lead to new challenges in the days after the storm departs. Virginians should make sure their family members, friends and neighbors are prepared for this storm. I encourage all Virginians to gather batteries, blankets, water, canned goods, and other necessities prior to the anticipated onset of storm conditions late Saturday and early Sunday."

Eastern Virginia residents who live in low-lying areas should be ready to evacuate ahead of the storm. Citizens should listen to local TV and radio stations for instructions, such as an evacuation order for specific areas, details about evacuation routes and locations of evacuation shelters. If an evacuation is ordered for your area, take your emergency supplies with you, including all medications. For a list of suggested emergency supplies you should collect for your family, visit: http://www.vaemergency.gov/readyvirginia/getakit.

At this time, the Commonwealth does not plan to reverse lanes on Interstate 64, however a final decision on this matter will be reached this evening. Residents should review the evacuation routes for their area to determine the best route for their families. In the event that a mandatory evacuation is necessary in specific areas, citizens will be provided further instructions through local and state authorities.

A state of emergency is declared under state law so that state resources can be made available. The governor's emergency declaration ensures a fully coordinated state response to support local initial recovery efforts. A declaration also decreases time needed to get personnel, equipment and supplies on scene.