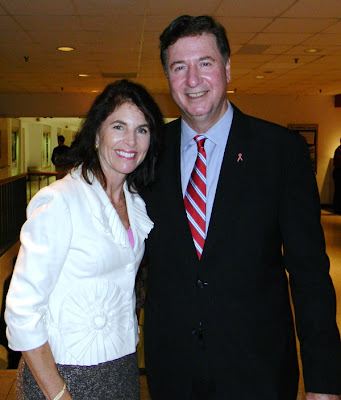 Susan and George Allen
This photo was taken after the debate Thursday night on the campus of Virginia Tech. Governor Allen was surrounded by dozens of students in the hallway outside the venue.

Afterward, we got great news that the Washington Examiner endorsed George Allen. Read the entire article ... it compares Maryland and Virginia and concludes, "The contrast between Kaine's partisan sellouts and Allen's common-sense conservatism could not be greater. Where Kaine has defended every aspect of Obama's disastrous green energy agenda, Allen has based his campaign on a prudent energy plan that will allow Virginia to keep taxes low, responsibly develop the state's energy resources and fund much-needed infrastructure projects." 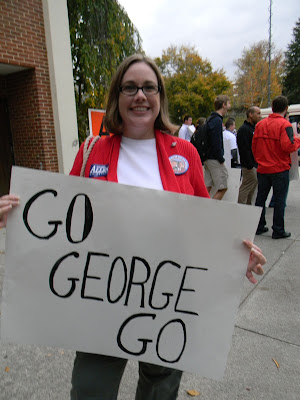 Dr. Marcy Hernick who is an assistant professor at Virginia Tech ... and a George Allen supporter. 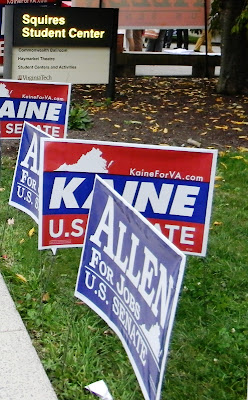 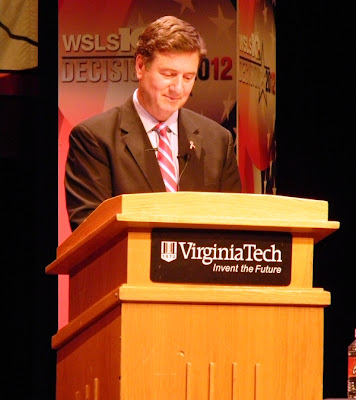 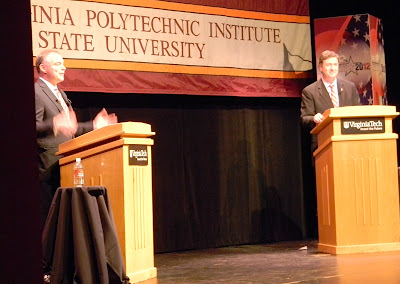 While Kaine believes in higher taxes instead of spending cuts, Allen showed once again that, as Governor, he worked across the aisle to cut taxes, reform regulations and government programs, and invest in education. He worked to make our streets safer so Virginia would be an even better place to
live, learn, work and raise a family. 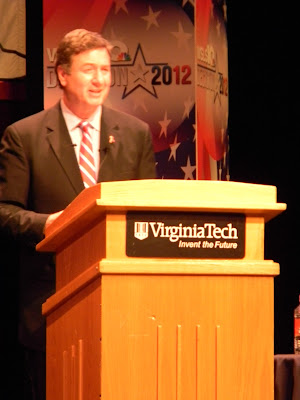 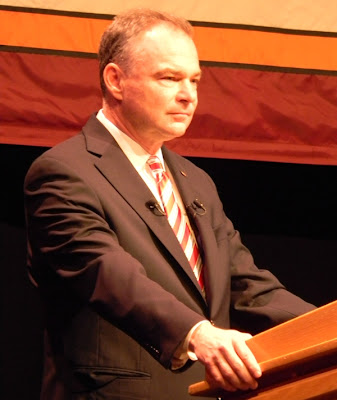 Tim Kaine's record advocates and supports policies that will hurt jobs and of putting President
Obama ahead of Virginians. As Governor, Tim Kaine tried to raise taxes each year, including a tax increase on seniors, working women, and Virginians making as little as $17,000 a year. 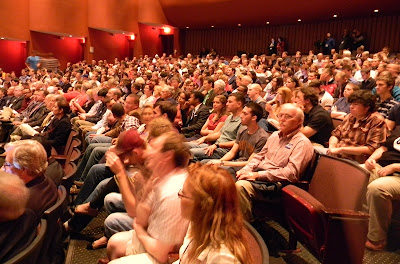 The auditorium was packed with students, the general public, and supporters of each candidate. 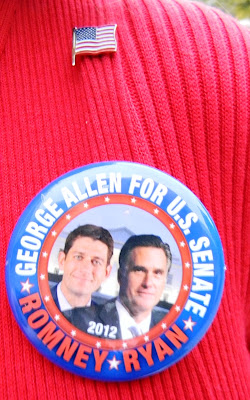 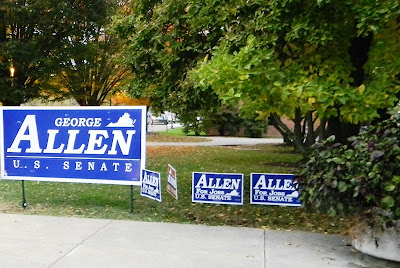 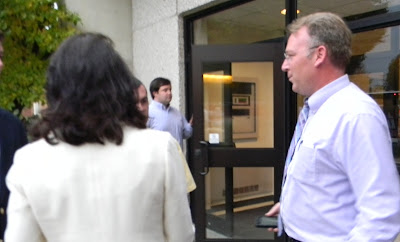 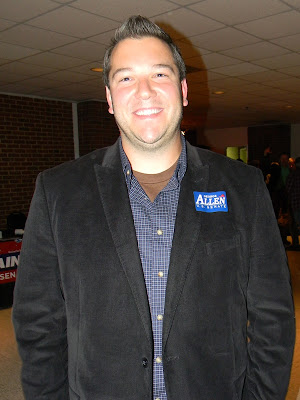 Matthew Bolling
A graduate of Virginia Tech, Matt was in the audience Thursday night. Ironically, he and SWAC Husband ran into each other -- they had never met before -- and started talking. Matt said something about next year being an interesting election year, and SWAC Husband said, "I'm supporting Bill Bolling next year because I think he's the best man for the job." He had no idea he was talking to Lt. Governor Bill Bolling's son. Matt stuck his hand out to shake hands and said, "I'm Matt Bolling." Priceless. 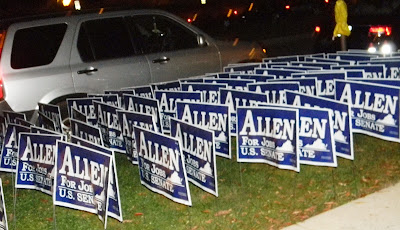 A sea of Allen signs. Interesting stories came out of the sign war at this venue. Lots of Allen signs and volunteers were in front of the building when Kaine stopped by in the afternoon. Campus whispers say he reportedly went inside the building, found eight supporters, and sent them out on the street to counter the two-to-three dozen Allen supporters.

In a first, campus whispers also report that for the first time Virginia Tech interjected itself into the sign way by saying the overwhelming Allen signs were "unfair" and a number of them were removed. Interesting that they changed the rules of the game in the middle of the game.

Tonight's debate was the final one between Republican George Allen and Democrat Tim Kaine and from our seats in the fifth row, we had an excellent view of the candidates and moderators. The event was filmed live on C-SPAN and carried by a number of other stations.

Some thoughts about the evening:

George Allen came across as a statesman. I've said that since the beginning of this campaign and, in the waning days before November 6th, nothing has changed. Tonight he once again demonstrated his calm and strong leadership style against a Tim Kaine who became visibly irritated, danced around his podium, frowned, shook his head, and lashed out at Governor Allen in one exchange.

Because of Kaine's behavior -- and that infamous eyebrow was indeed on display -- I wondered if he had spent last week with President Obama at Kingsmill on the James in Williamsburg, the presidential debate retreat where Obama prepared for his Tuesday debate with Mitt Romney. The President had come out swinging after a poor performance two weeks earlier, and he had sound bites to toss out like verbal grenades meant to create lots of smoke to confuse viewers.

Tonight was similar. Kaine tossed out some doozies. One in particular that jumped out was at the very beginning of the debate when he stressed the need for bipartisanship in Washington in order to get things done for the American people. He is correct -- we do need more bipartisanship and willingness of leaders from both sides of the aisle to work together -- but Tim Kaine is not the person to preach that philosophy.

Kaine was very much in support of Obamacare, that unknown monstrous, overreaching, unknown  government health care bill that was jammed down the throats of the American people without one single Republican vote. Bipartisan?

As Governor, Kaine proposed a huge tax increase on Virginians that was so horrendous not one Democrat voted for it.

Kaine had no problem lining up with President Obama on everything he proposed from Cap and Trade to bailouts and Obamacare. Yet he pounded -- again -- Allen's stand with his fellow Republicans while in the Senate. That, Mr. Kaine, is known as hypocrisy.

Cutting through the noise of the debate, Gov. Allen delivered his message to Virginians and that is that he knows his job is to fight for yours.