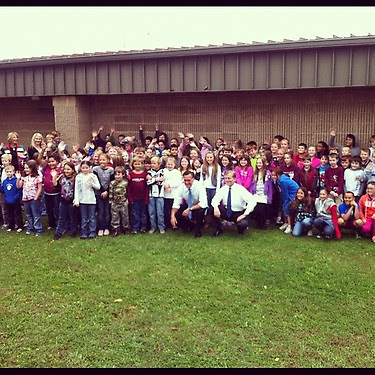 Who says motorcades can't turn around? And that Secret Service men can't be told there's going to be an unexpected stop in the schedule?

That's exactly what happened Monday in Rockbridge County near Lexington, Virginia, as Republican presidential candidate Mitt Romney's motorcade passed Fairfield Elementary School where what was described by press as an adorable line of dozens of excited school kids stood waiting for and then waving at Governor Romney's motorcade as it passed after leaving nearby Virginia Military Institute.

It abruptly did a U-turn back to the school and out stepped Mitt Romney and Virginia Governor Bob McDonnell.

Kids coming up to Gov and asking "Are you really Mitt Romney?" The kids are so excited.

And he included a photo of the two governors posing for a photo with the kids outside the school.

Go to Twitchy for more photos and tweets from press. Not unexpected for a dad of five boys and a bunch of grandchildren ... and Bob McDonnell is the dad of five children, too. Do you think the national press will pick up on it for the evening news? Don't hold your breath....
Posted by Lynn R. Mitchell at 10/08/2012 06:27:00 PM