Shout-out to News-Virginian: Thanks for the kind mention of SWAC Girl 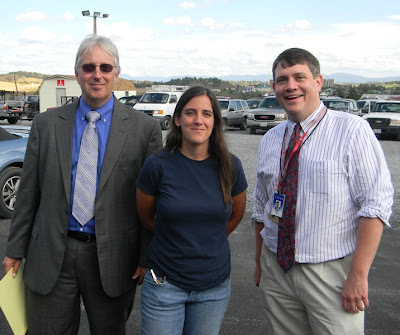 Many thanks to the Waynesboro News-Virginian for the kind mention today in their "Midweek Briefing" editorial. Editor Jonathan Hunley, reporter Bob Stuart, and photographer Rosanne Weber are just three of the hard workers at this local newspaper that covers the entire SWAC area and beyond.


SWAC Breakfast: Lynn R. Mitchell, a friend of this newspaper who runs the SWAC Girl blog, had a rather significant guest at her SWAC Political Breakfast on Saturday: Lt. Gov. Bill Bolling.

Fresh off appearing at events here for GOP presidential nominee Mitt Romney and Del. Dickie Bell, the Republican said a heavy turnout in the Valley from his party is crucial if Romney wants to win Virginia and the White House.

"This is Romney country," he said.

Or, put another way: "If Romney doesn't carry this part of the world, his chances of winning overall wouldn't seem that good."

It's all about turnout, and that's one reason the Lieutenant Governor has been everywhere throughout the Commonwealth rallying Republicans to get to the polls on November 6, 2012.

Thanks to Lt. Gov. Bolling for speaking to SWAC Political Breakfast, to fellow coordinator and moderator Kurt Michael, and to everyone who came out to be a part of the excitement that continues after the hugely successful Romney-Ryan Rally in Fishersville two weeks ago.