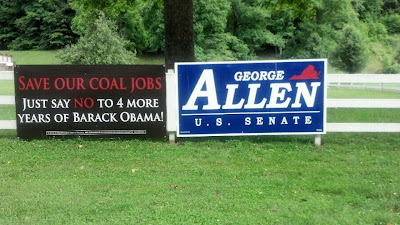 Thousands of coal-related jobs in southwestern Virginia have been lost in the last few months. As Norman Leahy writes at Bearing Drift:


As Mike Fletcher noted in his post-debate write-up, Democrat Tim Kaine barely touched upon the energy issue. But in the commonwealth’s coal-producing region, Kaine’s firm alliance with the Obama administration and the environmental lobby has not gone unnoticed.

A reader sent in photos from coal country ... check them out for yourself.

Meanwhile, George Allen is out with two new ads standing up for the coal community and the energy they provide for Americans:


Today, George Allen for U.S. Senate announced two new television ads, “My Life” and “Forced,” featuring testimonies from members of a 4th generation coal mining family. In the ads, Jay and Elaine Swiney give their firsthand accounts of the hardships Southwest Virginia families are facing as a result of Washington’s assault on coal through policies that Tim Kaine supports.


“It is hard to watch the effects that Washington’s assault on coal are having on my community,” said Jay Swiney, Mayor of Appalachia. “One by one, businesses are shutting their doors as families are struggling to make ends meet. Coal is a way of life here in Southwest Virginia, and my family has been mining for four generations.

But Tim Kaine stands with a ‘War on Coal’ that is causing power plants to close down, costing our neighbors thousands of jobs and raising our electricity costs.  George Allen is the leader we can count on to stand up for Southwest Virginia. George Allen is for us.”

“My Life” and “Forced” are both 30-second TV advertisements that will run in media markets in Southwest Virginia.