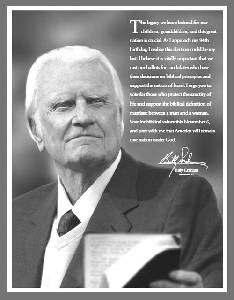 The picture of Billy Graham is striking alongside his words for conservatives in these final days leading to November 6. Though he doesn't mention Mitt Romney by name, the message is clear: vote Mitt.

The full-page ad found on page A10 of the Richmond Times-Dispatch (see above) on Sunday, October 21, 2012, shows evangelical leader Billy Graham holding a Bible and speaking these words:

"On November 6, the day before my 94th birthday, our nation will hold one of the most critical elections in my lifetime. We are at a crossroads and there are profound moral issues at stake. I strongly urge you to vote for candidates who support the biblical definition of marriage between a man and woman, protect the sanctity of life, and defend our religious freedoms. The Bible speaks clearly on these crucial issues. Please join me in praying for America, that we will turn our hearts back toward God."

A national campaign to express the urgency of conservatives to vote on November 6th was started October 18 by the Billy Graham Evangelistic Association, and already full-page ads have appeared in the Wall Street Journal and USA Today.  Others will appear in papers nationwide until election day.

The message is clear for millions of evangelicals across the country: Do not be apathetic, do not sit at home, go to the polls and vote. And vote for Mitt Romney. For many Christians, Dr. Graham's word is all they need to erase any doubts ... they will be at the polls on Election Day.
Posted by Lynn R. Mitchell at 10/25/2012 11:00:00 AM