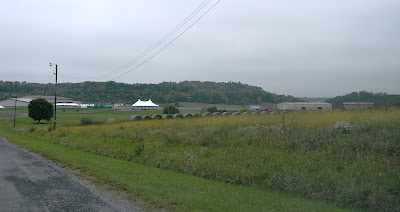 Expoland on Tuesday as workers prepared for Thursday's Republican rally.

For a few brief shining hours Thursday evening, Augusta County and the central Shenandoah Valley of Virginia will have the eyes of the nation on it as the Republican presidential ticket of Mitt Romney and Paul Ryan rally the faithful.

After Mitt Romney's stellar performance at Wednesday night's presidential debate against Barack Obama, and in an area where Republicans outnumber Democrats 3-to-1, organizers are expecting a crowd of thousands to converge on Fishersville. Forecasters are calling for a beautiful fall day with clear skies and temperatures in the 70s. Expect a bottleneck as cars back up leaving I-64, take the short quarter-mile hop to Expo Road, and turn right for the 1.5 mile drive to the fairground entrance.

Local anchors and reporters have been busy gathering any details available to pass along to an information-hungry public. Ken Slack at NBC-29 talked with voters and checked out Expoland on Tuesday as workers prepared the site for today's event. Reporters from all local news outlets will be there including the Waynesboro News Virginian, Staunton News Leader, and Harrisonburg's WHSV TV-3.

Country music star Trace Adkins is expected to kick off the festivities with entertainment beginning at 6:00 for the outdoor event before the candidates make their appearances. With a backdrop of the Blue Ridge Mountains to the east and the Appalachian Mountains to the west, the scenic beauty of the Shenandoah Valley will rival the speakers on stage. After dark, as the speakers wind down, fireworks will explode into the night sky to complete this GOP party.

One of tonight's speakers arrived in the area Tuesday night. Vice presidential candidate Paul Ryan has been staying at a private Wintergreen home and was pictured watching Wednesday  night's presidential debate from there. Mitt Romney, who was in Denver for the debate, will arrive in the area later today.

Augusta County Board of Supervisors Chairman Tracy Pyles, former Democrat-turned-Independent, was upbeat about the GOP having a party in his back yard. He noted that Romney and Ryan coming to the area was a big deal because of the national exposure brought to the SWAC area of Staunton, Waynesboro, and Augusta County, and added that it will also bring some extra dollars in for local businesses including hotels and restaurants.


Expoland is located in the Beverley Manor District of Augusta County. That district's Supervisor David Karaffa, a 29-year-old conservative Independent, will be attending the rally with his wife and two young daughters.

"I'm really happy Mitt Romney's coming to the area," said Karaffa who was enthusiastic about the event. "This area off-sets Northern Virginia's Democratic vote so it's good to see the presidential nominee come here. It says that he's not taking anything for granted, that every vote counts, and every person should vote. We're important enough that they made room for us in their schedule."

Virginia's Lieutenant Governor Bill Bolling, who is state chairman of the Romney for President campaign and held that same position in 2008, will be in Fishersville to welcome his friend. Congressman Bob Goodlatte, who represents the 6th Congressional District that includes the Valley, plans to attend as well as Susan Allen, wife of Republican U.S. Senate candidate George Allen, and local elected officials.

This area has not seen this much excitement in years.

As Pyles added with a touch of humor, "So there is an advantage to being a 'purple' state.  We are now the girl everyone wants to date.  So go ahead and bring the candies and flowers. We'll ride it as long as it lasts."