The Staunton News Leader's latest online poll is being manipulated by Daily Kos and MoveOn.org. The poll, put up on October 19, 2007, asks:

Rep. Bob Goodlatte, R-6th, has again voted against extending the State Children's Health Insurance Program. If a challenge is mounted against Goodlatte in 2008, who will you vote for? Goodlatte or the challenger?

An investigation began ... and it was discovered a tie with Daily Kos, the nationwide extremely liberal democrat blogging network, to spam or google bomb the News Leader poll by urging thousands of liberal bloggers to vote against Congressman Goodlatte.

Here is what was posted on Daily Kos: 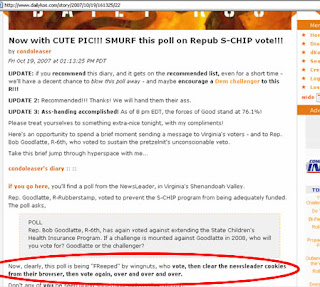 UPDATE: if you recommend this diary, and it gets on the recommended list, even for a short time - we'll have a decent chance to blow this poll away - and maybe encourage a Dem challenger to this R!!!

UPDATE 2: Recommended!!! Thanks! We will hand them their ass.

Please treat yourselves to something extra-nice tonight, with my compliments!

Here's an opportunity to spend a brief moment sending a message to Virginia's voters - and to Rep. Bob Goodlatte, R-6th, who voted to sustain the pretzelnit's unconscionable veto.

Take this brief jump through hyperspace with me...

if you go here, you'll find a poll from the NewsLeader, in Virginia's Shenandoah Valley.

Rep. Goodlatte, R-Rubberstamp, voted to prevent the S-CHIP program from being adequately funded.The poll asks, Rep. Bob Goodlatte, R-6th, has again voted against extending the State Children's Health Insurance Program. If a challenge is mounted against Goodlatte in 2008, who will you vote for? Goodlatte or the challenger?

Now, clearly, this poll is being "FReeped" by wingnuts, who vote, then clear the newsleader cookies from their browser, then vote again, over and over and over.

Don't any of you be seen doing something such as that, though.

Liberal bloggers from across the country -- who have nothing to do with Virginia politics -- are voting to try and influence the poll. It is MoveOn.org and Daily Kos manipulating politics in the Valley. They are going after Congressman Bob Goodlatte by verbally attacking him at Town Hall meetings, videotaping his appearances and then posting them online, making fun of his support of President Bush's Iraq policy by calling him "SurgeBob" complete with graphics, and now they are manipulating this online poll.

Underhanded? Give me a break, it's a straw poll with no restrictions. Anyone can vote.

MoveOn.org? More SWAC Girl lies. Where's your proof that MoveOn has anything to do with this?

If you have evidence against MoveOn, please present it.
as to SCHIP, what of the lying Republican who put up a sign on the floor of the House reading, Socialized Clintonist Hillarycare for Illegals and their Parents?
I don't hear you speaking against THAT lie.
SCHIP does not cover illegals, or NAYONE's parents.
But you're silent on that one, aren't you, Lynn?
Your hypocrisy is astounding.

And btw, I am a people of the Shenandoah Valley, and I say Goodlatte is a lying sack of shit and a despicable human being.
And I have the videotape, and the voting record, to prove it.

"Underhanded dirty tricks."
You mean like spreading lies about the financial status of the parents of two horribly injured children, and publishing their home address on the internet?
Oh wait, it wasn't "underhanded liberal bloggers" who did that.
It was mitch McConnell, by his own admission.
So you can dish it out, but you can't take it, right, Lynn?
Enjoy your Democratic governor and two Democratic Senators after 1/09.
There is nothing you can do to stop it.
The Republican party is a wounded, dying beast, and when it dies, America, and the world, will be far better off.

And so this is more infamous than denying health care to sick children, eh, Lynnzie?
You're quite the piece of work, you know that?

Eddie Garcia, I normally do not allow profanity on my website ... but I made an exception in your case with your description of our good Congressman so everyone could see what they are facing as MoveOn.org and Daily Kos try to permeate the Valley.

Hey, there are a couple thousand votes for Goodlatte - are you claiming they all came from this community, which averages 300 votes in a poll...?

There are just more people who feel strongly enough to vote for anyone else.

Now, you've claimed, here, that MoveOn.org was somehow involved in this. I say it's a typical Republican kneejerk smear tactic, that it's untrue, and point out that you've been called on it, asked for your evidence, and haven't produced anything. Not a scintilla of anything. It's just that blindly smearing is all you've really got.

Your day is quickly drawing to a close, and none too soon.

I see....the only way the Democrats can win a poll against Bob Goodlatte is to have the far-left groups of MoveOn.org and the Daily Kos flood the polls. We all know that the Valley is still very much RED and we intend on keeping it that way.

The SCHIP program is just the Democrats way of inching the US towards Government Universal Healthcare. I wish all those pro Government healthcare supporters would research the healthcare programs in Canada and Great Britain. Yes, I agree, our system isn't perfect, but the last thing we need is more government involvement in our system (e.g. SCHIP, etc.). We need less goverment. Most Candians that face serious medical probems come to the US for treatment...that is if they have the funds to do so. If not, wait in line.

Once the the goverment places controls, etc in our healthcare, there will be less research and development for new drugs. Once American's healthcare is controlled by the goverment, other countries's healthcare will suffer even more.

The Repbublican party isn't dying and if it did, the USA and the world would suffer dearly unless of course you like Socialism.

By the way Kestre1900, I suggest you start visiting DMV as often as possible, so you can get use to the lines that will be the norm once our healtcare is naturalized. Also, please don't complain while waiting in those nice comfortable chairs.

Lynn, I do have to agree with Kestre1900 when it was said you are a piece of work. Yes, you are.... and thank you for all your hard work and research. The liberals cannot handle the truth.

Just for the record, as far as I know, the only connection between this issue and MoveOn is that these Republicans are asserting a connection.

In typical fashion, they invent a smear, repeat it a lot, and challenge you to disprove it.

I challenge them to prove a connection.

...Wow, I thought that is what the Liberals did. invent a spear, have it repeated on the liberal media and hope it works.

Mr. Conservative wrote, Lynn, I do have to agree with Kestre1900 when it was said you are a piece of work. Yes, you are.... and thank you for all your hard work and research. The liberals cannot handle the truth.

Appears to be good news coming out of Louisina this evening.

I also told them they should run a poll that says "Bob voted to halt the Democrats from a new 61-cent-per-pack cigarette tax. Do you agree with his vote?"

I told them it would still be misleading question, but at least it would be true.

Ah, Mr. Conservative.
Not only is he repeating debunked lies about SCHIP like a good little foot soldier, he can't even get my screen name right.
Lines like the DMV, huh?
Vermont has a robust and effective health care assistance program for low and middle income people, and I never once had to stand in any huge lines, or wait an inordinate number of days to see a doctor.
Ah, the evils of socialized medicine. God forbid you should pay more for a pack of smokes, right?
Heh.
This is like shooting fish in a barrel.
And if the "Repbublican Party" (I like that" is not dying a well deserved death, why is it that 13 "Repbublicans" (I think it is) have either resigned or stated their intent to do so, or not seek re-election, in the last two weeks?
Not to mention your party's inability to field or fund a credible Presidential candidate.
And trust Lynzzie to seize on the "bad word" and thrash it around like a pit bull puppy with a knotted rope.
I had to give her SOMETHING, after all.

After reading, here, that MoveOn was involved in the results of this poll, I've discovered that by the same token, volunteers from StormFront were responsible for the 2K+ votes for Goodmochaccino!

Isn't it amazing what you can learn on teh blogz...???

I would be interested in exactly what "lies" that are beibng spread by those supporting the veto of SCHIP.
Fact is it was the Democrats who like to accuse Republicans as "hate mongers" and "racists" over their stands on illegal immigration and yet it was the negotiators of the bill on the Democrats side who had the provision that would have allowed legal immigrants to get access to the SCHIP program by eliminating the current 5 year residency requirement for LEGALS. WOW you liberals really care about the immigrants now don't you? I guess the liberals do not think the legal immigrant children warrant access like American kids into this program.
How about an expansion of the program that would allow all legal children access? Requiring legal citizens to wait five years is merely another for of political discrimmination. Oh, but they will tell you that we can't afford to "fund" those children and yet act like we do not have a issue with regard to our immigration policies.

Instead this legislation provides health coverage for more adults, families earning upwards of $80,000 per year and illegal immigrants at the expense of our most vulnerable children.

It does no such thing, Mr. Anonymous Coward.
It neither provides coverage for adults, nor any illegal immigrants.

Ya got em screaming SWAC GIRL... wonder if either of these two are card carrying members of Move On?

and if so would they admit it?

I ain't screaming, yes, I would admit it, and I am.
But MoveOn had nothing to do with this.
And, BTW SWACGirl:

They are...making fun of his support of President Bush's Iraq policy by calling him "SurgeBob" complete with graphics,

THEY? No, that's mine. And I'll contnue to "make fun of him" as you put it, as long as SurgeBob continues to be a liar.

Kestrel9000, You argue the point that swacgirl cannot prove that moveon.org is part of the poll.
My question to "You", Is can you prove that Moveon.org has "Nothing" to do with this poll? Please show us your proof.