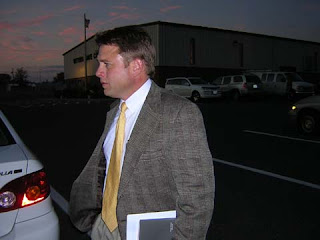 Republican Travis Smithdeal who is running for Pastures Supervisor in Augusta County received an endorsement today from the Waynesboro News-Virginian. In an editorial titled "Megasite silence far from golden," the NV said:

Few principles in government are more basic than this: When officials decide to spend the public’s money, the public should know about it. Many elected representatives somehow arrive at the conclusion that government money is theirs rather than taxpayers’. Occasionally, officials take it a step further, deeming it appropriate to make some spending decisions behind closed doors.

They cited Pastures incumbent supervisor Tracy Pyles and other current members and continued:

That has spawned perhaps Pyles’ stiffest challenge in four campaigns, this one coming from Republican Travis Smithdeal. He cites Pyles’ silence on the megasite study among the driving factors in his decision to run for the Pastures seat. “I felt like it was us and them,” Smithdeal told The News Virginian, referring to elected officials and the public.

They further explained that:

Elected officials should know that choosing silence over openness, particularly regarding spending, is the wrong way to go. Those who do not acknowledge as much with their actions should expect to hear the resounding voice of voters at the polls insisting otherwise.

Based on that thinking, we back the following candidates ...

Pastures: Smithdeal. Pyles’ knowledge of the issues regarding education, transportation and agriculture is likely superior to that of Smithdeal, a political neophyte. But we think Smithdeal has the requisite intelligence to perform effectively. Mostly, we like that when he saw what he perceived as a public wrong in the closed-door decision to commission the megasite study, he decided to do something about it. We urge voters to do the same.

Email ThisBlogThis!Share to TwitterShare to FacebookShare to Pinterest
Labels: Augusta County Board of Supervisors, Travis Smithdeal