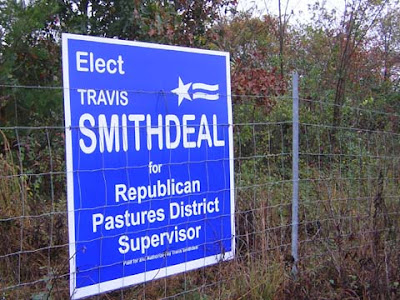 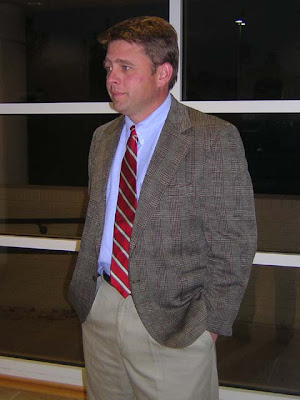 Travis Smithdeal, 42, is a young conservative Republican who offers a new face and a new attitude for Pastures District Supervisor in Augusta County. He is a listener ... his calm presence allows him to hear from everyone and not react without gathering information from all available sources including citizens and fellow Board members.

Travis has the background that makes a good leader....

Virginia Native: Travis was born in Richmond and grew up in Fredericksburg. Other than college and military time, he has lived his entire life in Virginia.

Education: Earning a BA in Political Science from Belmont Abbey College helped prepare Travis for a life of service to the community.

Family Man: With his wife, Eileen, they have eight children (six boys and two girls) and live in an historic home they are renovating in Deerfield.

Member: The Smithdeals attend St. Francis of Assisi with some other well-known local politicians including Delegate Chris Saxman and Supervisor Jim Bailey. Travis is a member of the Veterans of Foreign War (VFW) Post 3060.

Business Owner: The Smithdeals own Mountain View Country Store located on Rt. 250 in West Augusta which is the center of activities in that part of the county. This is a busy time of year for them as tourists and hunters stop in to gas up or buy supplies or grab a quick bite to eat. Travis works the register, interacts with customers, and visits with those who drop in. He is well-known and respected in the area.

* Open Government -- No secret meetings behind closed doors. The citizens of Augusta County have the right to know what their supervisors are planning when it comes to important topics regarding jobs and land use issues such as the megasite.

* Land Preservation -- Travis will fight for preservation of prime agriculture soil and water rights for our farmers in western Augusta County. Our land is our treasure.

* 24/7 Emergency Services -- Travis will push for full-time 24/7 emergency personnel. Augusta County is the second largest county in the state and he feels her citizens deserve the fastest and best aid when time is critical.

* Law Enforcement -- Travis will work for funding to equip our law enforcement officers with the most updated and efficient equipment available in order to best protect our families and neighbors.

* 2nd Amendment Rights -- As a military veteran and hunter, Travis is an ardent supporter of our 2nd Amendment right to bear arms.

* Supports Strict Zoning Ordinance of Adult Businesses -- Travis has been a leader in asking the Board of Supervisors to create strict zoning ordinances to limit where adult businesses that offer pornographic materials can locate in the county. He has asked that they not be allowed near schools, playgrounds, neighborhoods, churches, and other family environments.

* Illegal Immigration -- Travis is pro-legal immigration. He believes in giving law enforcement the tools to report illegals to immigration officials.

* English As Official Language -- Travis believes our ability to understand one another through a common language is critical to our strength and security, and supports English as our official language.