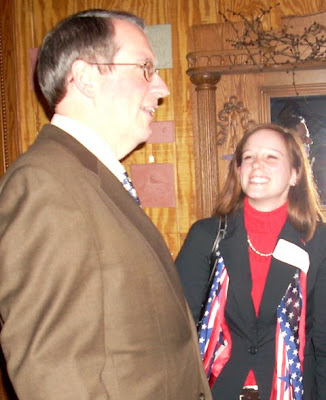 Congressman Bob Goodlatte (R-6th CD, VA) addressed those who attended Friday night's Shenandoah County Republican dinner. The 9-term representative was part of the Republican fight to prevent ObamaCare from passing but Democrats pushed it through on a partisan vote.

Even now, he said, 62% of Americans want Congressional Republicans to continue fighting the health care reform bill with a rally cry of, "Repeal and Replace."

While talking recently with a group of high school students, the subject of the health care reform bill and its costs came up ... and those students realized they were the ones on whose shoulder the huge debt would fall ... and the shoulders of their children.

I'm a visual learner so I loved the example the Congressman gave to help students visualize what $1 trillion looks likes. After all, most people will never see anything near that amount of money.

Imagine, he told the students, that you had a 4-inch stack of $1,000 bills and that was $1 million. Four inches high ... how high would the stack be to have $1 trillion? After all, $1 trillion was what it cost for the stimulus package that was passed by Democrats in 2009, the bill that was supposed to save and/or create 2 1/2 million jobs but has instead lost 3 million jobs.

How high a stack would it be for $1 trillion? The stack would be 63 MILES high ... right up into outer space!

That is quite a visual.

so did you ask Goodlatte how high a $300 billion transfer to corn farmers is?