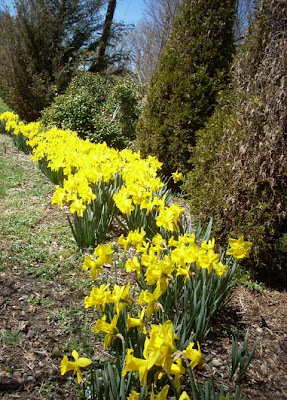 Today was a glorious spring day in Staunton, Virginia! 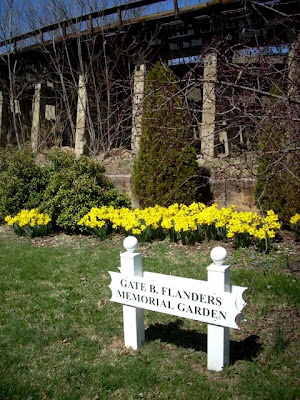 Jonquils bloom in the Gate B. Flanders Memorial Garden next to the railroad overpass. 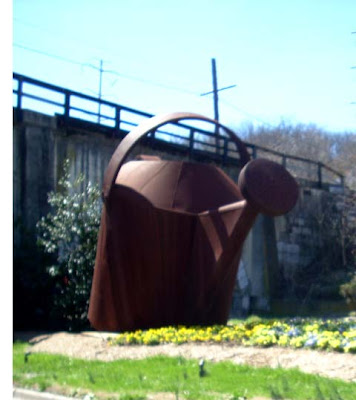 Panies were in full bloom at the Water Can at the Overpass.

What a goriously beautiful spring day in the central Shenandoah Valley with sunny skies, temps around 60, and a feeling of warm weather on its way. The breeze was a little cool but the forecast was for 80 degrees by the weekend.

While out and about, I met up with Kelly for lunch at the Depot Grille at the old train station in historic downtown Staunton. Dana aka Waitperson Extraordinaire waited on us as we enjoyed salads on the porch on what was an unusually light middle-of-the-day crowd. Kelly used crayons to draw and color hearts on the trademark butcher block table cover ... I grabbed a crayon and jotted notes on my side, tore it off, folded it up, and tucked away in my purse for later. Butcher block paper artwork can be seen in the entry of the Depot and there is some good stuff out there including several by SWAC blogger Bob from The Journey.

Talk is about the new Staunton Republican Committee Chairman Alex Davis who is young, energetic, and willing to work hard to pull together a badly splintered local Party. It will be exciting to hear about all the electeds who have contacted him to say congratulations. Alex doesn't talk the talk ... he walks the walk. Many thanks to former Augusta County Chairman Kurt Michael for chairing the mass meeting and running a smooth transition.

Staunton is a small city so you never know who you will see (or who will see you) while out and about. Yesterday we spied the Staunton News Leader crew in Clock Tower on Beverley Street enjoying some after-business refreshments. Editorial cartoonist Jim McCloskey and city editor Cindy Corell were probably waiting on more colleagues to join them as we headed out. I haven't always agreed with Jim about some of his political cartoons over the years but I liked the one he did about Francis Chester and the county board of supervisors using a hatchet to go after a fly on their collective forehead, and the one about being screwed over county reassessments.

Last night late there was a light rain as I drove by the Wharf and I noticed people sitting on the Statler Brother Stools located at the north end of the parking lot. It was dark. It was raining. Hmm.

It's spring in the Shenandoah Valley....