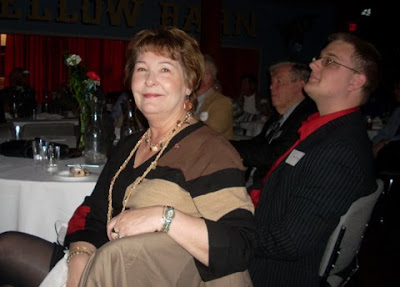 Playing off the "Driving Miss Daisy" movie, the title of this blog came to mind as I drove I-81 from Staunton to Shenandoah Friday evening with Trixie Averill riding shotgun as we headed to the Shenandoah County GOP dinner in Mt. Jackson.

Trixie is running for Chairman of the 6th Congressional District and has been traveling the District to ask folks to attend the convention on May 22 in Lynchburg to vote for her. Friday night was no exception as she mingled with the crowd, saying hello to familiar faces ... introducing herself to new folks ... asking all to sign up to be delegates to the convention.

She was introduced during dinner, and Congressman Bob Goodlatte endorsed her candidacy during his remarks. Indeed, an email was sent by the Congressman Friday night to Augusta County Republicans asking that they turn out for Tuesday's mass meeting for Trixie.

We both enjoyed dinner and, while driving in the dark down I-81 on the way home, we briefly discussed dinner and speakers and Republican politics ... and then conversation turned to our families and children and, for Trixie, grandchildren.

Our families truly are the wind beneath our wings as we go about our political endeavors, working for the principles we believe in, the tenets of the Virginia Republican Creed, and putting time and energy into electing principled candidates to carry those beliefs.

As I dropped her off in Staunton, she headed down I-81 toward Roanoke an hour away and I turned my vehicle toward western Augusta County for the 10-minute drive home. Saturday night Trixie would do it all over again at the Roanoke Reagan dinner, reaching out to ask for votes and encourage Republicans to come out and vote for her, a conservative, hard-working grassroots leader.