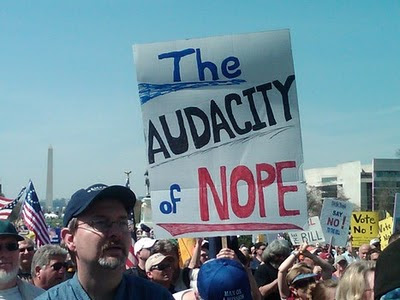 Freedom was the word of the day at Saturday's DC rally to make a last stand to plead with Democrats to vote "no" on mandatory health care and not sell out the United States of America and her citizens.

The Tea Party Express is almost ready to kick off their latest road trip from Searchlight, Nevada, home of Democrat Senate Majority Leader Harry Reid ... and their message to Democrats is, "Vote for health care today ... and we will vote against you in November."

Harry Reid tanks in polls
That could be a real threat as 60% think the country is going in the wrong direction. Harry Reid's seat is ranked as "lean Republican" as his numbers sink lower and lower with the latest poll showing voters leaning 38% for Reid and 51% for his opponent in the Nevada senate race.

Obama tanks in polls:
Barack Obama's poll numbers are in the tank, thanks to his fist jamming health care down the throats of American citizens, with a whopping 56% against him.

Congress tanks in polls
Nancy Pelosi and Harry Reid's Democrat Congress is now bottoming out with the lowest rating ever recorded. Those numbers, according to Gallup, have 80% DISAPPROVING of Congress while 16% approve.