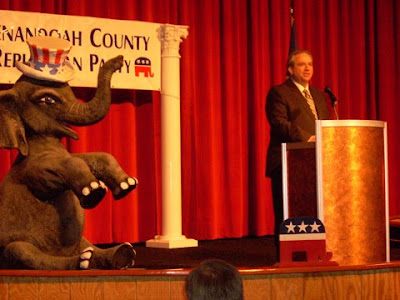 Lt. Gov. Bill Bolling shared the stage with a Republican elephant. You've heard the saying, "The elephant in the room...." This huge stage prop shared the speaking platform with Friday night's speakers. Bill Bolling was the keynote ... and he did not ignore "the elephant in the room." He looked at it, pointed it out and laughingly said, "This is a happy elephant ... a strong elephant ... a conservative elephant." Dinner guests laughed ... it was a hoot. 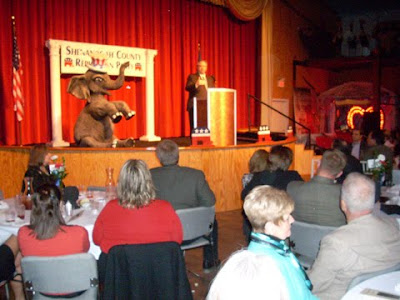 The Lt. Governor went on to talk about last year's historic Republican wins in Virginia, admitting that a change in the national mood helped Virginia candidates move from an election outlook of +7 Democrats ... to an election night reality of +12 Republicans for a 20-point swing.

People, he said, are scared to death about the future of their country ... Washington is making promises and spending money we don't have. The national debt per household when Obama took office was $56,000; currently it is $72,000 per household; it is projected to be $170,000 per household by the year 2020. 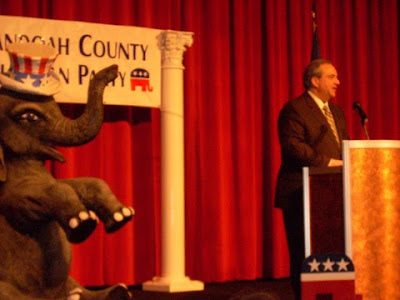 Americans, he said, sent a message with Republican wins in Virginia, New Jersey, and Massachusetts in November of 2009. In 2010, Americans can change the direction of our country.

When we are Republicans, he said, we win. When we are Democrat Lite, we lose. We loved Ronald Reagan because he made us believe it was morning in American.

We have to reach beyond the GOP. Most people in Virginia today, he said, are not Republicans or Democrats. They are independents. They are worried about their jobs, their families, how they will survive. "We can win every part of Virginia if we stick with our beliefs," he said.

Leaders are those who lift us up rather than tear us down. 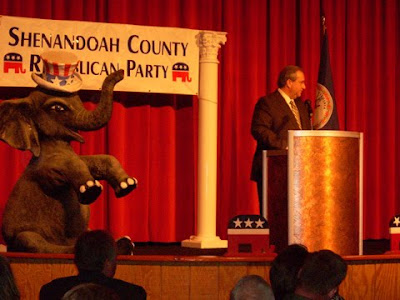 In 2010, Virginia Republicans were energized. We won. As the Lt. Governor's voice rose and echoed throughout the Yellow Barn, he emphasized that the government is subservient to the people ... not the other way around! "The future of America is in our hands. America will continue to be the Greatest Nation on Earth!"

Those in the crowd jumped to their feet in a standing ovation for a man who has been in Virginia leadership for years ... a man who came from humble beginnings ... a man who understands what Patrick Henry meant when he implored his fellow Virginians, "Is life so dear, or peace so sweet, as to be purchased at the price of chains and slavery? Forbid it, Almighty God! I know not what course others may take; but as for me, give me liberty, or give me death!"