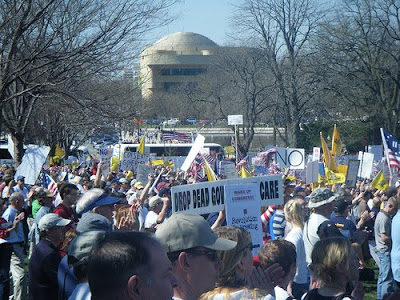 Today, over 30,000 grassroots Americans - folks just like you - descended on the Capitol for one final rally before the expected House vote tomorrow (Sunday). You would have been proud.

One lady told me she boarded one of our AFP buses at 2:00 a.m. today in Asheville, N.C. in order to get to the rally and then go inside to see her blue-dog Democrat Congressman, Heath Shuler. We later found out that after personally meeting with our members, Shuler would be voting no!

I stood on the stage with a Waco, Texas tea party activist, Toby Marie Walker, who had given up yet another day of her life away from family and work to "send these politicians one final message." And, I talked with Stella Lohmann from Atlanta, GA who told me that "there's no quit in us." She's right.

As members of Congress went into the Capitol for votes, they were confronted by our thousands of activists telling them to "kill this bill" and "keep your hands off my health care."

To give you a feel for the arrogance going on inside the Capitol, Democratic Congressman Alcee Hastings (Fla.) actually said the following in a committee meeting which was debating just how the final health care takeover bill will look and how it will come to the floor of the House: "There ain't no rules here, we're trying to accomplish something...All this talk about rules...When the deal goes down...we make 'em up as we go along."

That's the kind of crass political wheeling-and-dealing you and I face as we try to fight and defeat this bill. But, fighting we are. Remember that NovemberIsComing.com petition I told you about? Well, in just over 2 days over 274,000 Americans have signed the petition telling their member of Congress that if you vote YES on the health care takeover now, then I'm voting NO on you in November.

The phone lines inside the House offices were ringing non-stop with your calls today. I know literally hundreds of thousands of emails are pouring into their offices. Click here to call or click here to email your member of Congress today.

As I spoke to the crowd today I could not help noticing in the sea of people a family just to the left of the stage. The grandfather, I assume, was wearing a baseball cap that read "Korean War Vet" and he was holding the hand of a young girl, 7 or 8, who held a small American flag in her other hand. The mom was waving a handmade sign that read "Health care takeover? Not on my watch." Two teenage boys were slapping high fives with each other right behind her with what had to be their dad standing beside them. He was waving a sign that read "From San Diego with love ... unless you pass this bill." Three generations of one family - all the way across the country for one reason: to take a stand at a time when we face a huge challenge.